A couple of weeks back we decided to try out jet skis for the first time ever. We live very close to the Columbia River and in this area, "everyone" has boats or water toys of some kind, except us....oh and my in laws....oh and the next door neighbors.....well you know what I mean. Anyway, there's this place that one can rent jet skis, right on the river so we tried it.

It was a great time, with my in laws coming along for the picnic. Kevin took the girls out the first time. Then his dad went out with him. Dad's hat fell off and they both decided to lean over to get it. You can guess what happened! That's right, they both fell in the river. After some time of watching them try to get back on the jet ski, the jet ski rental guy started out there to see if they needed any help. Just as he was headed out there, they made it back on the jet ski.

Now for my turn. I was a little nervous because I have never done anything like this before. The rental guy (a young teenager) showed me how to run the jet ski. I didn't quite understand and asked lots of questions. He looked me like I was an idiot. So I headed out on a trial run. When I came back in I didn't know how to stop it or anything, so came in too fast. Oh well, nothing damaged at least. Then, with Heidi hanging on behind me I went on my way. I was speeding along feeling pretty good when the kid came out on his jet ski. "Uh oh, what's wrong now?" I thought. He informed me that I needed to go faster as the speed that I was going was too slow and was hard on the engine. Think 1st or 2nd gear. OK, I gulped and squeezed the accelerator and sped up to a terrifying speed.(I was probably still going to slow.) Then I decided I better head back in 'cause I didn't want to use up all our time. We had rented the thing for an hour. So I slowly came back in trying to remember all the rules, like stopping the engine before you are too close to the riverbank and all that.

Then it was over. Kevin took Maggie out and then our hour was done. So here are a couple of pictures of our adventure. 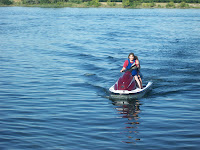 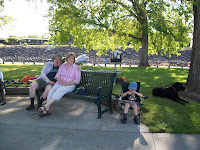 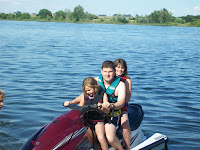 1.Coming in from my ride.
2.Mom, Dad and Alex watching from the side
3. Kevin and the girls
Posted by Oochakitty at 9:36 AM 2 comments:

The kids and I have been going through the pictures and videos that we have stored on our computer in recent days. We came across this video which we remember fondly. It is of our dog Ritzy that we had when we lived in Nampa. She was a very excitable dog and liked to get in on the action if the kids and I were doing anything like dancing or tickling or whatever. So here's a video of her dancing with us.

We had my husband's family over for the usual 4th of July BBQ. It was a good time of fun and fireworks. I just have to wonder however, what it is about fireworks that gets guys so fired up. Here's some pictures of what I mean. 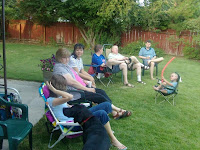 In the first photo, we are all relaxing, chatting etc. In the next one, some fir 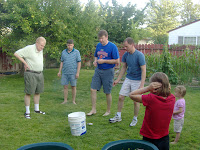 action. My sister in law was hiding in the house. :-) You can see from the photo, my daughter is in on the action too, but has her ears covered in case it gets too loud.

So I guess it's true that in some ways we never grow up.

Bowling with the kids 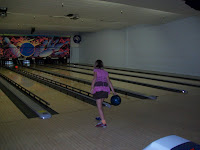 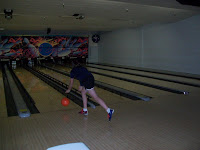 Today we went bowling. The local bowling alley has this great deal where kids can bowl 2 games for free. So the kids were excited to bowl. One problem, I am a not so great bowler, having only done it a handful of times in my life. So how am I supposed to teach them how to bowl?

Well, here's how it went..... The girls had the bumpers up and I didn't and we all got close to the same score. My younger daughter kept swinging her ball out to the side and I was just sure she was going to lose it and whack the girl bowling in the next lane, but fortunately that didn't happen.

I think I got one strike and one spare through two games of bowling. My final score for the 2nd game, (the better score), 98. My eldest daughter scored a 94 and my younger daughter scored 86.

Well we had fun, and it was nice and cool inside the bowling alley too!
Posted by Oochakitty at 12:55 PM No comments: 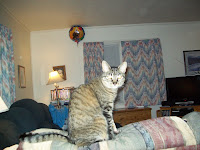 Ok, So I figured out how to add a photo. Ignore the horrible curtains in the background. That was in the rental house we lived in a few months ago. This is Oocha's favorite couch to sit or sleep on, keeping an eye on everything.
Posted by Oochakitty at 1:00 PM No comments:

Everyone else is doing it and why Oochakitty

I have several family members who all blog including my hubby. He recently said, "You should start a blog too." I responded, "I have nothing to say". But that is not actually true. I have plenty to say because I talk all the time. I should have said, I have nothing thought provoking or interesting to say. So I am going to blog about nothing, and I may or may not tell anyone about it, so there will probably be no one reading it. Hey but at least I get a chance to say everything I want about nothing.

So why is my blog called Oochakitty. Oochakitty is the name of my cat, who is now 12 years old. We got her as a 4 month old kitten at the local kitty shelter. I thought she looked just like a cat I had when I was younger, named Daisy. So I named her Daisy, which lasted about 5 minutes. My hubby, who is famous for coming up with silly names and sayings, started calling her "Oocha". So it eventually evolved to Oochakitty, and the name "Daisy" went by the wayside. It is nice for a handle because no one else has ever used that, so it works well. So don't start copying it now.

Oochakitty is a pretty nice cat. She has handled 3 moves with only a little bit of whining, much less whining than the rest of us. She is very soft and nice to cuddle with when she lets me do it. And she has put up with all 3 of my kids through babyhood, 3 dogs, and of course my hubby. He has gotten nicer over the years out of respect for her age, but some of our family will never forget K putting the cat on top of the door, or on top of the plant shelf in the living room, just to see if she could get down. Or giving her a "swirly" when she is getting too frisky. He has never ever hurt her, just some kind teasing to let her know that he is boss. But she knows the real boss is....Oochakitty of course.

Soon I will post a picture of her when I figure out how to add pictures to this blog!
Posted by Oochakitty at 11:56 AM 1 comment:

Oochakitty
I'm a thirty-something wife and mother of 3 kids. I also work part-time as a hospice social worker.